2020 has had quite the impact on music agencies. Alexander Witschge, the man behind Compass Agency, went from organizing sold-out events to organizing online talks this year. In this interview, he tells us how he keeps himself motivated and reveals some of his upcoming projects to us.

Not much really (obviously). I’ve had some streams and seated shows with NCT (incl Beats n Bass, closest to a festival we’ve been this summer) and hosted ‘Curated by Talks’ in August, so it hasn’t all been quiet, but definitely not what I was expecting at the beginning of this year. Especially since we (NCT) released our album this year; we had quite the tour lined up.

My girlfriend and I bought a house last year and moved in 2 days before the March lockdown, so we’ve spent quite some more time in our new place than I could’ve imagined. I still have my daytime job (4 days a week as a Recruitment Marketeer at Stedin) which I can do from home. Most of the weeks have been about working during daytime, sports in the evening and drinks on the weekend with our small quarantine club. I’ve read quite some books and taken quite some walks the last couple of months; both really help to keep someone sane during these times. So basically a really civilised life with some proper uncivilised hangovers in the weekend. 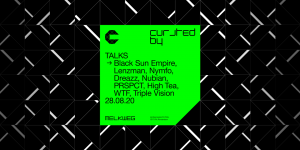 Obviously buying a house and moving there changes someone’s day to day life. Regarding music, well, the last couple of years have really been a pressure cooker. Which I really enjoyed. But having some more time to just sit down and contemplate things isn’t all that bad; my life’s just slower than it used to be. Less shows to prepare and play, less bookings to handle and line-ups to book, less flights. And most of all, less people to have a proper (backstage) chat with. This year really makes me realize how much my social life is influenced by music.

What’s it like to run an agency? How do you attract organizers and artists?

Running it from a-z can be demanding and can take quite some time. Though honestly, it’s one of the best things I ever started. Making both artists and promoters happy, seeing guys from your roster making big steps and basically playing a small part in professionalising the scene; that’s where I get my energy from.

When it comes to attracting organizers and artists; well, it’s basically marketing, sales and building your network by being there where it happens; in the clubs and at the festivals. Most important for us is being open and honest to everyone you’re working with or want to work with; in the end we (artists, promoters, agents) are all in this together, so we always try to find a solution that works for everyone.

Compass Agency was founded back in 2015. What influence did 2020 have on the agency?
Do you handle things differently compared to other years?

Well, we never had to cancel or postpone so many bookings, never had so many bookings scheduled for the next year already and never had such a shit year financially. Of course we had to handle things differently as well, like checking travel restrictions and such for the offers that did come in. But in general, we spent less time on Compass than the years before because there simply isn’t a lot to do.

You’re also working as a booker at Liquicity. How is it to combine these jobs?

It makes life for both Alex@Compass and Alex@Liquicity a lot easier and bookings sorted a lot quicker. Key thing, again, is transparency to avoid any conflict of interest. I never booked an artist for Liquicity simply because the artist was on my roster, or took someone on my roster simply because the artist released/played on Liquicity.  It’s mainly just really cool to be able te be so involved within drum & bass.

I’ve always had an entrepreneurial mindset I think. So after my first couple of drum & bass events and noticing the lack of those in Delft (my hometown), a couple of friends and I decided to simply promote an event and see what happens. Pushing the music we like, the sound we believe in. Which is what I’m still doing 15 years later.

Good question and I’d honestly wouldn’t know which advice stands out, since I think in general I get advice every day. I think at this point, and I don’t know who gave this advice to me, it is simply “Don’t force it”. Stuck on something? Zoom out, do something else and get back at it later on. Your master plan isn’t working as you wanted? Adjust the plan, don’t stubbornly stick to it. It’s okay if something doesn’t work out at once. So don’t try too hard. Unless you’re locked in a toilet with no phone and no one can hear you. Force the door.  Kick it. Push it. Destroy it. (Yes, been there done that).

And do you have any advice yourself, for people who are struggling in this current situation?

Yeah, don’t force it 😉. What really works well for me is to take at least one walk every day, get out and don’t stick at the same place/desk the whole day. But I think most important is to reach out to each other. We’re all dealing with isolation, everyone understands if you just need someone to talk to, to vent. Feel like someone you know might need a chat? Go for it! Physical distancing doesn’t have to be social distancing.

Not anywhere in particular and not noticeably somewhere different on good and bad days. Sounds cliché, but inspiration is everywhere. A book I read, a movie I saw, a sound I heard or food I smelt. And motivation? I always strive to do and give my best. And there’s always something to improve. That’s my motivation, getting a bit better every day. I simply enjoy what I’m doing in life right now.

When I’m preparing or playing a set I generally know the outline I want to work with, the points where I want a certain momentum. So I work towards that, but mainly just go with the flow. My own, Jeroen’s (NCT) and obviously the crowd’s. Not really much more to it.

Well yes actually, and this is the first time I mention both. First of all, we’re working on a merger at Compass, joining one of the bigger UK agencies with our roster. Nothing to do with Covid, that’s just delaying it. So that’s pretty exciting for all of us

And since we’ll probably won’t be back in the club for a while, we’re starting a podcast series with Curated By. No mixes, but solid interviews with the artists we rate. Kind of like the Curated by Talks but focussed on one artist per episode.

Last but not least, I finally have some time to reorder my music collection, which was long overdue. So it’s definitely not all that bad.