This year, many lives got turned upside down by a virus all known to us by now. But as the creative brains we are, we always find a way to get through it. We were wondering how people in the creative industry were doing, what they were doing and most importantly, what’s keeping them strong?

If you have ever been to Koelhuis or know the place, then you probably already know the story behind the newest hotspot in Eindhoven. For those who haven’t yet been introduced to this place (and those who have), do read further. Gianni Jorissen, the man behind Koelhuis, has had an interesting year himself as well, as he has been working on some new cool things. In this interview, he spills some tea about these projects.

In the first few months I was a bit shellshocked and decided to lay low. I saw events where I was supposed to be a part of getting cancelled left and right, but Koelhuis didn’t have a permit yet so we weren’t invested into any of those events at that moment.

Currently we’re just investing all our time and money to come out of corona with a bang. Multiple venues ranging from club, restaurant, atelier space, exhibition, festivals… We’re putting our energy towards the future. If we see an opportunity to do something cool during corona, we’ll take it.

How did your life and career change this year?

We’ve become professional and started looking broader. We learned a lot about being a company and an entrepreneur and how to create something cool. My life personally is fully focussed on having a few venues running. I’d love for at least a small form to blow off some steam at the moment because sometimes it feels like I’m going in too deep.

Yep! I just opened a cafe in Rotterdam for takeaway and delivery. I’ll be opening an Atelier space soon in Rotterdam and Utrecht, an exhibition space and festival venue. On top of all this, I’m working on Construct 2.0 (and Construct Rotterdam) and some little side things. 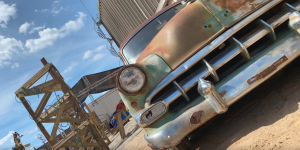 I started as a DJ! I wanted to play a music style that nobody would let me play in their club or party so I started my own concept. This is the very first mix I recorded by the way, even before I did a first gig. It’s so badly mixed but I still love to look back on it. It says 7 years ago this was published.. how times have changed! While answering this interview I’m listening to this and feel less and less sure if I should’ve shared this.

What is the best advice you’ve ever been given and by whom?
And do you have any advice yourself, for people who are struggling with the current situation?

In school I had a class where we’d map out our future goals and how to implement them. We learned how to analyze problems in it and talked about how we wanted to reach that goal. I think that is the best advice ever given to me. Write down a goal, make a plan how to reach it, adjust along the way. Maybe the goals or the steps to reach them shift but at least you’re working towards something instead of running in circles. My advice would be an add on to this. The hardest step is to get from 0 to 1! Be persistent and eager!

On good days I get inspired by the people around me having a good time. On bad days I work and if that doesn’t work, I force myself to gym, walk and clear my head.

Dancing in a hurricane trying to deflect debris and catching valuables flying around.

Now some more questions on Koelhuis. At first, the place was meant to open December 2019, but that got postponed quite a long time. Can you tell us a bit more about that?

In short, there’s three permits you need to have to open a club in an abandoned warehouse. We were pretty on track and on good terms with the municipality. That’s when our first date to open was decided, but due to some small things going south on their side they weren’t able to get the permits in time. The second time around we asked them when they’d be 100% sure we’d have all the permits. This came to be December, with events on the 21st, 26th and 31st, but due to some other problems, we, again, were not able to open. We moved our NYE event to Klokgebouw, but it was all quite devastating still. We were already in so deep. Anyway, on May 28th of this year we got the permit and were able to open. So in all, it took us a full six months, or nine if you count from the moment we applied for a permit.

Now that you have opened, what are the plans for Koelhuis after corona?

I’m gonna call the municipality as soon as corona is over and ask them if we can do a 48 hour rave. I don’t want to miss a second of being able to be sweaty and gross in a cool ass party again. During corona we might open with Construct outdoor again, maybe we’ll do a sitting concert or other experiences, who knows? We’ll see what the measures bring and act fast if we see something cool can be done! 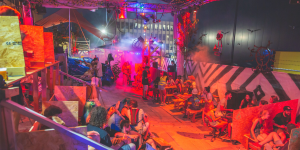