Having massive events on the planning, the lockdown came as a big bummer to Maddie Goossens aka Madster. How he spends his Friday and Saturday nights now? Creating some new tunes for both his own project as well as for Alora, a side project in collaboration with Twan Koning, making some fine remixes and much more.

In August you played BEATS ‘N BASS. How was it to play for a live audience again?

It was great to be ”out there” again, seeing many familiar happy faces. But it just didn’t feel the same. Everybody had to stay seated, and as you might know I am usually closing nights with harder sets. Therefore, I decided to play a different sound than I usually do. I quite enjoyed it, as I also really love the deeper side of drum&bass, but it just wasn’t the same as before Covid. 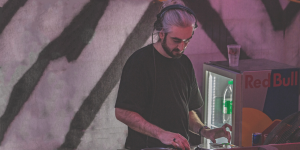 You released a remix of the track ‘Bloodline’ by Droptek. How did this come about? How were the reactions on this?

Droptek is also signed at Korsakov Music, and they were looking for people to remix the tracks on his album ”Symbiosis”. I gladly took this opportunity to be a part of this, as I really enjoyed the original album, and lots of big names like Audio, DC Breaks and Joe Ford would also be remixing. The reactions were quite good actually. I can be a bit indecisive and more often than not I’m having a hard time deciding when a track is done, so it was good to read the report after the release and see names like Phace picking my remix as their favorite of the remix album!

Before Covid, most weekends I had a gig to play. On Fridays or Saturday nights when I wasn’t playing anywhere, I was in the studio with friends making music or just DJing all night. This suddenly all stopped in March when we went in lockdown (just a few days before I would play on Rampage 🙁 ). So now I am just at home during the weekends. Making some music on my home setup, or playing video games.

I was about 14 years old when I pirated Fruity Loops (don’t hate me, I have purchased FL Studio now!) and started making some really weird music, just for fun. I was into house music at that moment and when I saw some videos of people DJing I wanted to do that as well. So I worked my ass off at the local supermarket and was able to buy a mixer and cd player, only to realize I needed at least two cd players to mix. So yeah, that sucked, having this newly purchased gear in my bedroom, which I could not use. After some time, I bought a second cd player and I could finally practice DJing. I befriended a local resident DJ at a nightclub at the time I was 17, and he took me with him on the nights he had to play, so I could play some music as well. After some gigs, I went to my first drum & bass night and started playing drum & bass under the alias Madster, which was my nickname in school.

You’re used to closing NOX events, what’s the most amazing memory you got from these events?

I think it was during the last NOX in the Effenaar, when at the end of my set Twan joined me and we played Alora – ID and a sneak peek of an unreleased Alora tune. Seeing lots of friends in the crowd and backstage behind us going wild was such an amazing feeling. I also won’t forget the surprised face of Twan when I dropped the unreleased Alora tune immediately after ID when we were told by the sound guy that it was a few minutes past 06:00 already and we really could not play another tune, haha.

That’s a hard one, but I’m going for the time at We are Electric with Deadmau5 when I was having a bad case of the flu. I had a fever and wasn’t feeling well the entire night, but I had to wait until 04:00 before I could play. I was already in the venue because I wanted to see Deadmau5 play, but after some time I felt so bad I was packing my stuff to go home, when my girlfriend and Twan urged me to stay because the music would cure the flu on stage. And they were right! As soon as I started playing, the energy of the crowd kept me going and I had a great night.

I get lots of inspiration from games and movies. I listen to game and movie scores a lot, there’s some amazing music in games and movies! My track ”Blunderbuss” for example is heavily inspired by one of my favourite games: Bloodborne. Nerf This is obviously inspired by Overwatch, and there are more tunes I made with movie/ game samples or references, which you might hear when you listen closely.

I think my workflow is quite chaotic. When I have an idea for a tune, I usually start with creating the atmosphere/ feel I want the track to have. I then start creating drums and go from there. I never label or name stuff and I save all files just as asdf1, asdf2 etc. It’s just lots of quick ideas and sometimes, when I’m in a certain mood and things click, music appears. There’s also lots of nights I’m just making horrible stuff and nothing works out.

I am low key working on some deeper drum & bass as Madster, and there is new Alora music on its way.